How did Evernote grow?

Evernote is a beast. With 150 million users and a $1 billion valuation, they can officially claim that they’re the top note-taking app in the world. Imagine being able to own that statement. Congrats, Phil Libin and Chris O’Neill.

People assume that successes of this magnitude are winners from the start. But that wasn’t the case with Evernote. Let’s give a bit of background, then I want to analyze how Evernote grew (so fast!).

Evernote is a place to store everything. In their own words, that gets 60 million page views each month, ‘Remember everything’, ‘Get organized’, ‘Succeed together’, ‘Your second brain’. 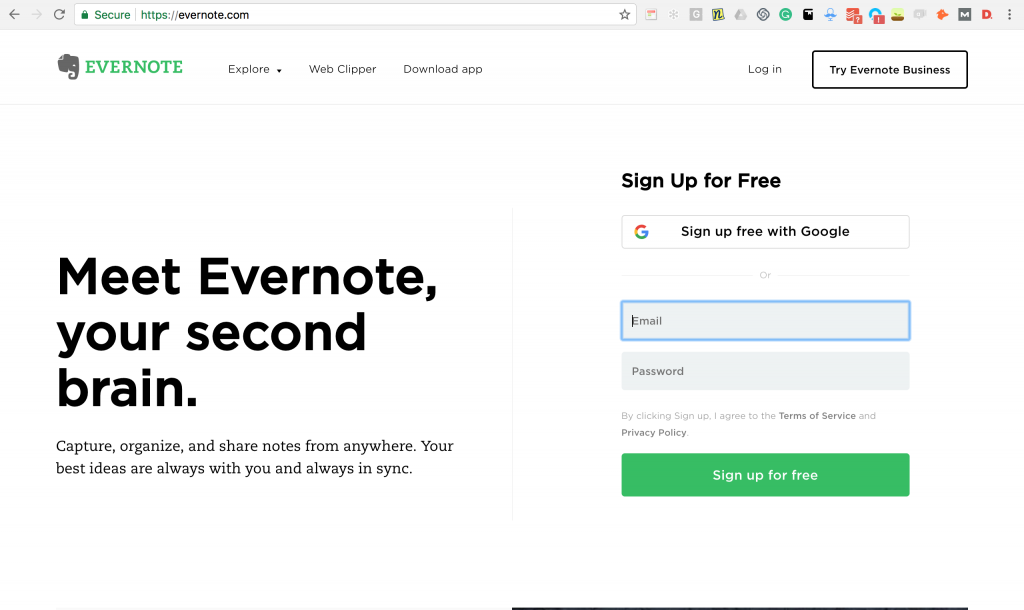 Evernote is a multi-platform app to capture, organize and share notes from anywhere. Eric Libin, CEO, and Founder of Evernote suggests that they are more than a tool to store images, photos and files, they are your intellectual brain. Enough of the history, how does Evernote work? Here’s a video for those that need that quick fix.

It’s awesome for a ton of reasons. Me personally? It’s a place to dump out thoughts. There’s a lot of value in ‘passing’ out stuff from your head into a place you can rely on. I rely on Evernote.

Before I talk about how they grew, ridiculously fast, I want to show you that even mega-success stories don’t always start that way.

Evernote raised investment in 2009 but before then things weren’t so easy. Until they raised, CEO Eric Libin explains that they were never more than a few weeks of cash flow. Funding was from Founders and close friends and family only.

They also had a really close call, with only 3 weeks cash flow available following the 2008 financial crisis.

The long story short. Evernote decided to stop and close. They had run out of money and investors had backed out last minute…

But then something just short of a miracle happened. A passionate Evernote user from Sweden dialed him up. He told Libin that he had been using the product for two months. He said it had changed his life — it had made him happier and more organized. Libin remembered thinking, “That’s nice. This makes me feel better. Maybe if you can make a difference to one random guy in Sweden, that’s enough.” The user, who asked to remain unnamed, went on to offer some investment. Twenty minutes later, they ended up on a Skype call and then within about a week or so, the investor had wired Evernote a half-million dollars.

The rest is history. It has opened my eyes to how quickly things can change in times of uncertainty if you strongly believe in it and have the validation from users to prove it and it’s ability to scale.

How many users does Evernote have?

Here’s the exact answer during their early traction. 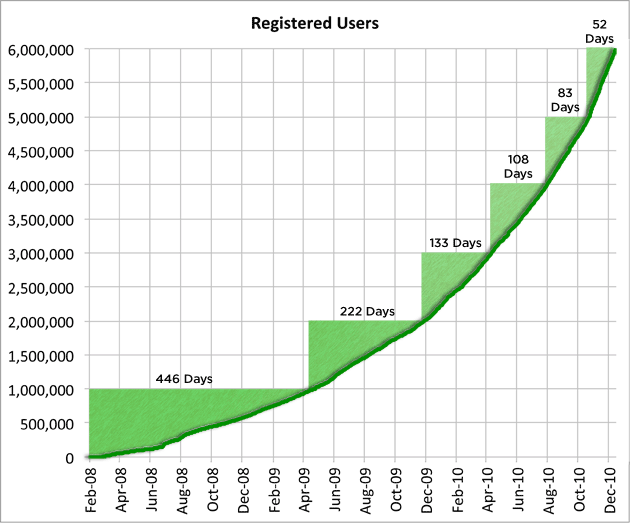 It took Evernote 446 days to get 1 million users and almost half the time to double again. The growth is astounding. So let’s go granular on how they’ve achieved this growth.

For your reference, this isn’t my opinion. I’ve collected articles documented directly on Evernote’s blog as well as public sources such as Wikipedia from key management team blogs.

How did Evernote grow?

Evernote have their own growth engine. Below is a list of key things they did. By things I mean mindsets, actionable, repeatable tasks, growth channels and discoveries. There’s more, but in my opinion the below are the ones you really need to read.

Libin’s bold statement, “I think the most important thing at a young age that you can do is cultivate a group of brilliant, high-energy, willing-to-work-for-free, best friends for life.”

My understanding of Libin’s logic was that they have already experienced the learning curve with certain people and so when launching a new business, they do not need to go through the the same curve. It means they are faster, more lightweight and focused exclusively on traction from the start. Here’s a Libin quote: “It’s kind of boring to go home to the family reunion and be asked about what you do, only to respond that you build cryptography software used by the Department of Energy and other three-letter agencies, which was our last company. We wanted to build something we were excited to use and talk about. We wanted our friends to use it and think it was helpful and cool,” he says. “So, we built something we wanted to use. And by luck, it turned out that other people wanted to use it, too.”

2. Start a product for your own needs

He was such an advocate of Evernote, that he said it’s the first company that he was passionate about to work on for life.

Passion shines through in your product. But what really makes the product great?

Evernote timed itself perfectly to piggyback the wave of mobile apps when they were introduced to the market and the market grew. Libin quoted, “We definitely were very lucky with the timing, absolutely. We were very fortunate that the app stores were launching right as we were getting ready. If we were 6 months behind in our development, we would have missed all of it.”

Evernote’s timing meant that their product had instant reach to millions of users who wanted to start installing and using new mobile products. Evernote was there, waiting.

Some may consider this luck. And perhaps the first one was. But Evernote replicated this model with every new AppStore launch, new platform development was the number one focus, and they rode the wave of each new growth area. “What we did, is we really killed ourselves in the first couple of years to always be in all the app store launches day one”.

There are mixed feelings on Freemium models. But we all have to admit, it worked for Evernote. Freemium got users in and was the fastest way to grow. Their product kept them hanging around and converted them into paying customers. Freemium was the catalyst that turned them into a Millenium Falcon and made them go at the speed of light.
Libin says, “We don’t care if you pay, we just want you to stay around and keep using it and get all your friends to use it.” Because Evernote’s numbers show that the longer you use the product, the more likely you are to fall in love with it, and sooner or later you’ll be happy to pay for it.”

An interesting note. Evernote’s revenue stats show cost per active user was $0.09 per month and they made around $0.25 per user per month.

Evernote doesn’t pay for customers. Imagine a business this big that doesn’t pay for a single customer. They don’t spend money on user acquisition nor on SEO. Product, product, product. Focusing on the best product turns users into advocates, and advocates are the most powerful thing to have on your side. Evernote is testament to that.

“I dug up the original model we used when we closed our first Silicon Valley round with Morgan Capital in 2009. I found the original plan, we built this model for them that shows how we’re going to grow, both users and revenue. It was from 2009 and that plan went to the end of 2011. The end of 2011 back then was unimaginably far in the future for us. I just found it, I wanted to compare how we did against what we projected and we were within 5% on both users and revenue, that’s kind of amazing.”

Evernote launched a closed beta in 2008 that reached 125,000 users within four months. But how? Techcrunch covered them with 100 invites to give away and things spiraled. This is what started the growth engine.

Libin insisted that closed beta was for user testing only. But, it worked and it worked big, “We never thought of the closed beta as a marketing exercise. We were frankly terrified that everything would crash all the time.”

I strongly advocate building a community around your product. Users that are with you from the start, are the best people to help shape your product and guide it through turbulence.

Great companies have a vision. Libin’s was to build a 100-year company. A company with purpose.

“Because Evernote got very popular in Japan, we started doing a lot of work over there. … Some of our partner companies were these Japanese companies that are more than a 100 years old and they’re still innovating and we felt really inspired by that. Let’s try to combine the best of both worlds. Let’s build a company that has the long term planning and thinking of some of these great Japanese companies, combined with the best of the Silicon Valley startup mentality. We don’t just want to build a 100 year company, we want to build a 100 year startup.”

There are lots of abstractions you can take from his explanation. For me, it simply means keep young, fresh and maintain the enthusiasm and passion you had from day one of your startup.

There’s more. Evernote Ambassador program, Evernote Rewards, Evernote stickers… but these are all a whole another story 🙂

Like to hear more? Drop me an email on access@dragapp.com.

Can you launch a startup that reaches 1 million users, first year? Can you achieve a $1 billion valuation?

This article is designed to show you Evernote’s roadmap to success so that you can understand and use some proven techniques that worked for them, to help your growth.

And that is all 😉